SEOUL, May 27, 2016 — LG Electronics (LG) is collaborating with the British Broadcasting Corporation (BBC) and satellite operator SES. to host a demonstration of High Dynamic Range (HDR) broadcast technologies at the ninth SES Industry Days conference this week in Luxembourg.

HLG technology was developed by the BBC and NHK to enable a backwards compatible transmission of HDR content. Employing a single distribution bit stream which can be decoded by both dedicated HDR receivers and legacy non-HDR receivers, the HLG system requires no production metadata, making it compatible with existing broadcast infrastructure, thereby enabling a straightforward migration to HDR television production.

The flexibility of the BBC’s innovative HDR HLG technology makes it an excellent choice for broadcast HDR services while SES’s new HDR test channel allows industry partners to test a variety of new display standards and content. Viewed on LG’s OLED TVs, HDR HLG content looks more realistic, delivers greater depth and the deepest blacks. As the first flat-panel television with infinite contrast ratio and no backlight panels, LG OLED TVs are unrivaled in their ability to deliver an HDR experience like no other.

“LG has been at the forefront of television innovation for decades,” said Wayne Park, executive vice president and head of LG’s European operations. “We are committed to supporting the efforts of our partners to standardize HDR broadcast technologies and make advanced display technology more widely available.” 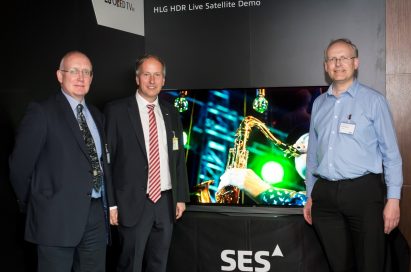