SEOUL, Mar. 18, 2014 — LG Electronics (LG) today announced the start of sales of G Pro 2 in the Asia Region in markets including Hong Kong, Taiwan, Singapore, Philippine, Vietnam and Indonesia among others. The device was first introduced to a global audience at Mobile World Congress in Barcelona last month where the smartphone was well received for its innovative UX features,superb display and advanced camera functions.

“With its 5.9-inch Full HD IPS display, versatile camera functionsand user-oriented UX features, we expect the LG G Pro 2 to make a strong impression with Asian customers.” said Dr. Jong-seok Park, president and CEO of LG Electronics Mobile Communications Company. “Asian consumers have been the biggest fans of smartphones with displays over five inches and we wanted to make sure that the G Pro 2 exceeded their high expectations.”

LG’s proprietary UX feature, Knock Code™, enables users to power on and unlock their G Pro 2 in one easy step by entering a personalized pattern on the display. Consumer research shows that users check and unlock their devices more than 100 times a day which was the inspiration for LG to take its existing KnockON feature to the next level. With G Pro 2, users can tap or “knock” the display in a specific sequence two to eight times to power on and unlock the phone. And with more than 80,000 possible combinations and no fingerprint streaks, LG’s patented Knock Code™ solution offers a greater level of security over other methods. Customer response has been overwhelmingly positive, as more than 50 percent of participants selected Knock Code™ as the most anticipated feature of the G Pro 2 in a survey1 in Korea.

And the G Pro 2 is the first device to offer a 13MP camera with OIS+ (Optical Image Stabilizer Plus) not to mention innovative features such as 120FPS HD Video Recording and Slow-Motion playback with adjustable speed, 4K ULTRA HD Recording, Magic Focus and Natural Flash. With such advanced image-capturing capabilities, the camera found on the G Pro 2 can not only outshoot and outperform most other smartphone cameras, but many stand alone point-and-shoot cameras as well.

Details regarding the availability of G Pro 2 in specific countries will be announced locally.
Key Specifications: 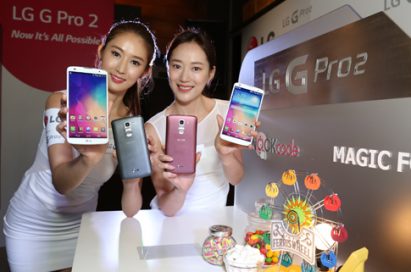