SEOUL, May 28, 2012 -– Global sales of LG Electronics’ LTE smartphones have reached three million units, positioning it among the frontrunners in the competitive LTE market. Achieving the three million sales mark in the nascent LTE market confirmation of LG’s smartphone strategy and speaks of the company’s success in meeting the needs of customers in North America, Korea and Japan. LG will be significantly expanding its LTE leadership in 2012 as the number of countries offering LTE smartphones from LG expands from 10 to 20 markets by the end of the year.

LG’s offering of LTE smartphones to date include:

of one million units within the first 100 days, making it the most popular LTE-capable phone in a highly

competitive market at the start of the year.
– LG Optimus Vu: –- Launched in Korea in February 2012, the Optimus Vu: with its 5-inch IPS display and 4:3

currently on the market.
– LG Optimus LTE Tag -– This smartphone offers Tag+, a unique feature which uses Near Field Communication

(NFC) to interact with special stickers that change the phone’s settings automatically.
– LG Optimus LTE II –- The latest in the series and the world’s first LTE smartphone with 2 GB RAM.

“Reaching the three million milestone this early in LTE’s global roll-out is a strong sign that customers are on board with our LTE strategy,” said Dr. Jong-seok Park, President and CEO of LG Mobile Communications Company. “Improving the user experience is at the core of LG’s vision and we’ll continue to take leadership in the LTE market by offering features that offer clear customer benefits.” 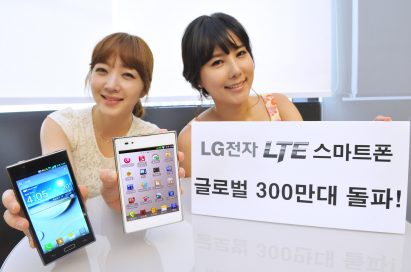