SEOUL, Jul. 8 .2011 –- LG Electronics (LG) has joined with the International Vaccine Institute (IVI) and the Armauer Hansen Research Institute and the Ministry of Health of Ethiopia to implement a mass vaccination program for children in Ethiopia. LG and the IVI jointly launched the program on July 5 in Ethiopia’s capital city of Addis Ababa.

Aiming to help break the cycle of poverty and disease that affects many children in Ethiopia, LG is coordinating a fundraising campaign inside the company via social media. LG has also pledged to donate 1,000 Korean Won for every comment left on LG’s social media sites, including its blog, Facebook and Twitter pages.

“This program is part of a larger campaign that strives to deliver on our message of ‘Hope for Life is Good,’” said Won-woo Na, President of LG’s Kenya subsidiary. “We want to instill hope and aspiration that by beating preventable diseases, we can end the cycle of poverty and disease and give children in Ethiopia the opportunities they so rightly deserve.”

Since last year, LG has been focusing all of its efforts in Ethiopia by working with the IVI, a Korea-based international organization devoted to developing new vaccines for developing countries. The IVI has been providing technical support to the Ethiopian government in order to strengthen the healthcare system and to better address the wide-ranging logistical and infrastructure requirements needed to successfully implement a large-scale vaccination program in Ethiopia. The program’s aim is to dramatically reduce the number of children in Africa – as many as 120,000 a year according to the WHO – who die every year due to acute watery diarrhea (AWD), mainly from drinking contaminated water. Immunizing children against AWD is among the most effective ways to prevent needless deaths and suffering. LG expects to immunize 20,000 Ethio-pian children from 2012 to 2013. 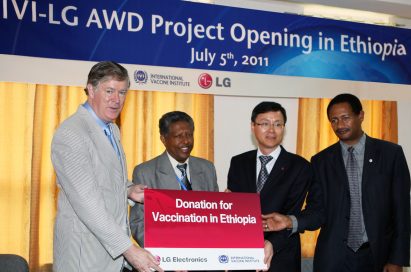