SEOUL, Apr. 22, 2011 –- LG Electronics (LG) hosted a large-scale extravaganza on April 21 in France to mark the global launch of its CINEMA 3D TV, featuring LG’s next generation 3D TV technology.
At the majestic Le Grand Palais in Paris, 1,500 guests enjoyed the debut of LG’s CINEMA 3D TV, which combines the first officially certified “Flicker-Free” picture in the industry with comfortable, battery-free, lightweight glasses, a brighter picture, more flexible viewing positions and a wide viewing angle. Together, the new features make CINEMA 3D perfect for watching 3D in groups with family or friends.
“When it comes to watching 3D entertainment for longer periods in greater comfort, CINEMA 3D is the perfect choice,” said Kyung-hoon Byun, Executive Vice President and Head of Overseas Sales and Marketing, LG Electronics Home Entertainment Company. “We’re eager to show everyone just how exciting our new 3D TVs are and why we’re confident this will become the industry standard for 3D TV technology.”
Approximately 1,500 guests from across Europe and other regions came together in Paris to watch a screening of the new 3D movie ‘Rio’ on a massive 27m x 11m screen. Two records were established last night — the biggest audience ever to view a 3D movie and the largest 3D screen in the world– both confirmed by Guinness World Records immediately after the event. The event also included its share of celebrities with actors Sophie Marceau and Isabelle Giordano and film director Claude Lelouch among those in attendance.
“The connection between CINEMA 3D and entertainment is a very natural one,” said Mr. Byun. “That’s why CINEMA 3D will also have a presence at the Cannes Film Festival next month, as part of a wider campaign to speak directly to the public about how much progress 3D technology has made.”
CINEMA 3D arrives in a marketplace that was slow to accept 3D in the first year but looks set to take off in 2011. Whereas almost all the major 3D TV models last year were of the shutter glasses (SG) variety, LG’s CINEMA 3D range employs Film Patterned Retarder (FPR) technology, which addresses the problems that hampered the enjoyment of earlier 3D TVs. CINEMA 3D uses a polarized film on the screen to deliver different
images for the left and right eyes. These images are then matched up with CINEMA 3D glasses and the result is a 3D picture that is Flicker-Free – as certified by European quality assurance agencies TÜV and Intertek -– with less crosstalk, meaning no more dizziness and eye fatigue that sometimes occurs with wearing shutter glasses.
And because they’re completely free of electrical and moving parts, LG’s CINEMA 3D glasses weigh no more than 16 grams, making them comfortable to wear even for extended periods of time. At only USD 10 per pair, it is now possible for entire families and groups of friends to enjoy 3D at home together. This key benefit was underscored at the recent National Association of Broadcasters (NAB) Show in Las Vegas when Avatar director James Cameron predicted that cheaper, lightweight polarized glasses would need to become the industry standard for 3D TVs to become truly embraced by consumers. And with millions of people already wearing corrective lenses, LG’s convenient 3D clip-ons are a great solution which SG 3D TVs simply cannot offer due to their bulk and complexity.
Further contributing to higher picture quality is LG’s Light Boost, a thin film that ensures 3D images are shown at their full brightness. What’s more, a wide viewing angle and flexible viewing positions make CINEMA 3D ideal for watching in groups or while sitting or lying down in any spot in front of the screen.
CINEMA 3D also addresses another problem that affected previous 3D sets – the lack of content. With a new, highly advanced 2D to 3D conversion feature, CINEMA 3D TVs deliver top quality 3D on the fly, meaning viewers will never be short of good 3D content to watch.
In Paris, LG demonstrated that 3D technology has come of age with CINEMA 3D. By introducing the next generation technology, LG is poised to take 3D to new heights and into living rooms all over the world.
CINEMA 3D Specifications:
Flicker-Free (Intertek / TÜV Certified)
Light and Comfortable Glasses
Light Boost
Flexible Viewing Positions / Wide Viewing Angle
2D to 3D Conversion
Smart TV: Home Dashboard, Magic Motion Remote Control,
Smart Share, Premium Content, LG Apps and Web Browser
(excluding LW4500)
LED Plus
Micro Pixel Control
TruMotion 200Hz (LW6500) / TruMotion 100Hz (LW5700, LW5500, LW4500)
DLNA / DVR ready
DivX Plus / HD
Smart Energy Saving
Clear Voice II
AV Mode II
# # # 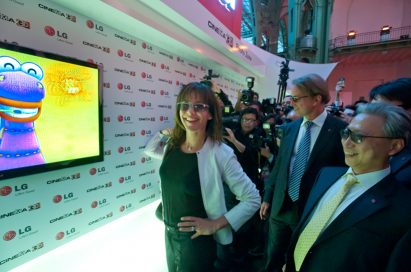 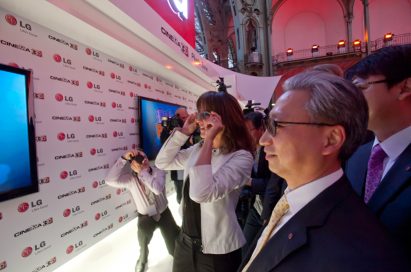 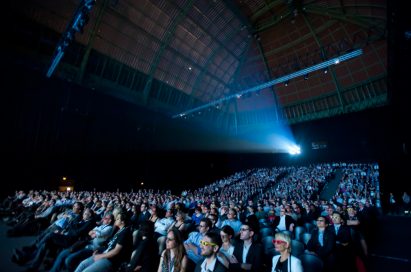